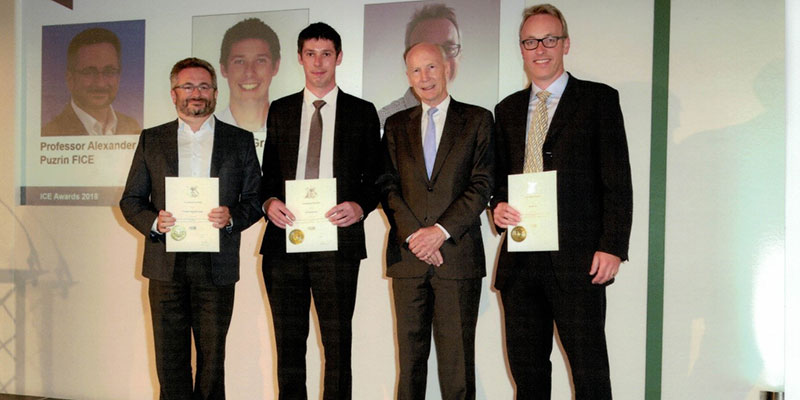 Tom Gray attended the Institute of Civil Engineers 2018 awards yesterday to receive the David Hislop Award alongside Professor Alexander Puzrin from ETH Zurich and Andy Hill from BP, for their work on submarine landslides. The award is for the best paper published in ICE proceedings on heavy marine design and construction with particular reference to offshore engineering.

Tom first read a paper by Professor Puzrin on shear band propagation in landslides back in 2007, after consistently finding a mismatch between traditional slope stability modelling results and the long, thin landslides observed on geophysical seismic data across the world. It took until 2012 when a project came along in the Caspian Sea where the landslide hazard was significant and a new model was needed. Tom recalls ‘I have to thank Kevin Hampson from BP, who believed in my idea that we could apply some of Professor Puzrin’s work to the problem, and gave me the go ahead to approach Sasha at an upcoming conference’.

Then came three years of excellent collaboration that not only included those recognised with the award, but also David Rushton, Dr And Mills, Prof Denys Brunsden and Dr Mark Lee. The work was peer reviewed by external industry specialists for BP, and also by Professor Jim Rice at Harvard and Professor Rob Viesca at Tufts.

“I’d like to thank all those who have supported and contributed to the work” said Tom, “and it is great for it to be recognised by the wider industry. We certainly look forward to applying it to future projects”.